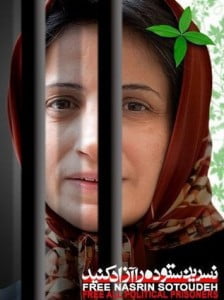 November 11, 2010 – According to reports by HRANA, The husband, sister, and brother of Nasrin Sotoudeh were granted a ten minute visit with her from behind a [glass window] in Evin prison.

Reza Khandan, Sotoudeh’s husband who was finally able to meet his wife after two and a half months of incarceration, told the Feminist School, “Nasrin informed us that at the request of friends and her lawyers she decided to break her “dry” hunger strike and begin drinking water. However, she will continue a regular hunger strike (no food) until her demands are met.”

According to the Feminist School, in this meeting Sotoudeh told her family, “So far three judicial and security officers have promised to release me, however, to date, no one have stood by their words. I will therefore continue with a hunger strike until my demands are met.”

After the brief meeting with his wife Reza Khandan said, “I didn’t recognize Nasrin because her face was so gaunt. Nasrin was a mere 57 kilograms (125 lbs) when she was arrested. Since her incarceration she has lost approximately 13 kilograms (28 lbs). Her face is no longer recognizable to me.” Khandan added, “Nasrin confirmed that she was connected to IVs twice during her hunger strike.”

Nasrin Sotoudeh, human rights lawyer and women’s rights activist was arrested on September 4, 2010. Sotoudeh has been on a hunger strike since September 25, 2010, nine days of which were a dry (no food, no water) hunger strike