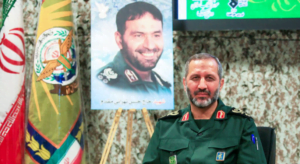 In recent years, barely a week has passed without a media appearance of Amirali Hajizadeh, the media-savvy commander of the IRGC Aerospace Force.

Charming, gregarious, and always wearing a smile, Hajizadeh doesn’t miss any opportunity to talk about drones, domestic car production, and the rapid growth of Iran’s missile force while carefully ignoring more inconvenient topics such as the downing of Flight 752.

It came as a bit of a surprise, then, when on November 11, his deputy Seyyed Majid Mousavi attended in his absence the presentation of two new missile-related books published on the anniversary of the martyrdom of Hassan Tehrani Moghaddam, the founder of Iran’s missile force.

Some immediately tied the presence of Musavi to swirling rumors about Hajizadeh’s health and alleged COVID-19 infection, as reported by the web site Event24.

However, over the course of the presser, Mousavi delivered remarks that might be more consequential than any health rumors related to IRGC top brass.

In what at first seemed like standard phrasing, Mousavi boasted about Iran now possessing a full range of missile capabilities including “medium-range, long-range and short-range.”

However, when his remarks were paraphrased by an IRIB news broadcast, another word appeared, “intercontinental.”

The same term was used in a Mehr News article describing the event. Closer examination of the original footage of Musavi’s remarks reveals that he indeed uttered another term after “short-range” that was subsequently edited out and replaced with a sneeze from the audience.

The mention of an Iranian intercontinental ballistic missile (ICBM) capability is a stunning reversal from Iran’s previous official line.

So far, Iran has committed to voluntarily restrict the range of its missiles to 2000km, far short of the 5500km that constitute the lower threshold of ICBM ranges.

Read the complete article at NewsNow.com